The asset need not be a commodity, e.g., the Beanie Baby craze of the late 1990s, in which the asset was various instances of a manufactured product line controlled by a single company. (Though after that crash, at least you had a nice cuddly toy.) The key point is the “mania phase.”

Charles Mackay’s superlative Memoirs of Extraordinary Popular Delusions and the Madness of Crowds, first published in 1841, remains an excellent and accessible introduction to economic bubbles and the thinking behind them, starting with the Tulip Mania of 1637 and the South  Sea  Bubble  of  1720. Bitcoin is a completely standard example. 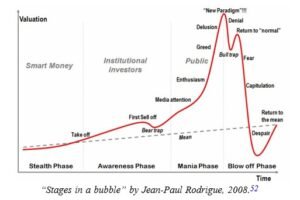 The first bitcoin was mined in January 2009, but for the first year the enthusiasts just exchanged them amongst themselves for fun. The first known conversion to conventional currency was by Martti Malmi, ardent anarcho- capitalist and Bitcoin core coder: “I sold 5,050 BTC for $5,02 on 2009-10-12.” The first exchange site was bitcoinmarket.com, which opened 6 February 2010. The famous first commercial transaction (two pizzas, cost $30 including tip, for 10,000 BTC) was a few months later, on 22 May 2010.

From there the price rose steadily to 1c in July 2010. Bitcoin version 0.3 was mentioned on 11 July by tech news site Slashdot, gaining it some notice in the technology world, and inspiring the founding of the Mt. Gox exchange. In November 2010, WikiLeaks released the US diplomatic cables dump; the site was cut off from Visa, Mastercard and PayPal shortly after at the behest of the US government, but could still receive donations in Bitcoin. The  price  of  a bitcoin hit $1 by February 2011.

In April 2011, anarcho-capitalist and businessman Roger Ver, who had made his fortune with computer parts business Memory  Dealers,  heard  a  segment about Bitcoin on the libertarian podcast Free Talk Live. Ver promptly went to Mt. Gox, the Bitcoin exchange mentioned on the show, and bought $25,000 worth of Bitcoins, single-handedly pushing the price up from $1.89 to $3.30 over the next few days. He would spend the next few years buying and advocating Bitcoin, branding himself “Bitcoin Jesus.”

The earliest minor bubble grew and popped in June 2011, after an article on the Silk Road darknet market, mentioning Bitcoin, in Gawker. 1  BTC momentarily peaked at $30, before dropping to $15 after Mt. Gox was hacked in June, and slowly declining to $2 by December. By a year later, in December 2012, it had risen to $13. (With minor wobbles such as the August 2012 crash when the Pirateat40 Ponzi scheme collapsed.)

In this era, Bitcoin was largely evangelised by advocates for its hypothetical use cases and political possibilities. The actual use case was buying drugs on the Silk Road, the first notable darknet market, which started in January 2011. Mining at home could still be profitable at this time.

The bubble really got going in early 2013. By March, the price had hit $50 and The Economist warned that this was really obviously a bubble, noting how closely the price tracked Google searches for “bitcoin”. It hit $266 in April after a month of going up 5-10% daily, crashed to $130 in May and $100 in June, and rose steadily through the rest of the year – with occasional hiccups when Mt. Gox, by now the largest Bitcoin exchange, handling 70% of all Bitcoin transactions, had unexpected delays in allowing customers to cash out in US dollars.

The Silk Road was busted in early October and Bitcoin plummeted from $145 to $110. But it rose again with increased interest from China, with highly efficient mining operations starting up with custom-made ASIC mining chips, and local exchanges gaining great popularity.  The price started November at

Mt. Gox stumbled along for a few months then finally collapsed, taking everyone’s deposits with it; it later came out that they had been insolvent since at least 2012. The price declined through the rest of 2014, bottoming out just below

$200 in early 2015. As a currency, Bitcoin did somewhat worse in 2014 than the Russian rouble and the Ukrainian hryvnia.

It is important to note that Bitcoin advocates believed the late 2013 peak was not a bubble, but the natural upward progression of the price as Bitcoin increased its share of the economy; e.g., Rick Falkvinge’s March 2013 piece “The Target Value for Bitcoin Is Not Some $50 or $100: It is $100,000 to $1,000,000.” The collapse came as a complete shock to many; when Mt. Gox went down, Reddit rbitcoin posted and pinned suicide hotline numbers.

When the economy collapses, Bitcoin will save you!